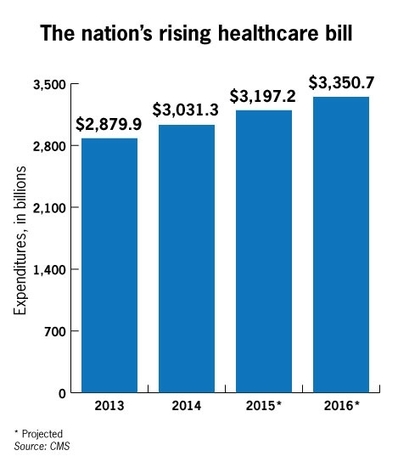 Bob Herman writes for Modern Healthcare, “The U.S. healthcare system spent $3.2 trillion in 2015, or almost $10,000 for every person, according to the latest federal projections."

Read the full article at: www.modernhealthcare.com

As a result of the U.S. reducing the number of people without health insurance, government agencies, companies, and consumers, as a whole, spent much more on healthcare in 2015 than they did in prior years. The increase in spending is in line with the predicted average of 5.8% per year for the next 10 years.

Economists worry that not enough is being done to slow down healthcare spending, which averts funding from things like education and transportation. “It's a lower rate of spending (in 2015), but once you move that over to real spending net of inflation, it's still significantly above the growth of tax revenues and GDP and wage growth,” said Thomas Getzen, a health economist at Temple University in Philadelphia. “Even at 5.5% growth, if wages are going up 2.5%, you're in trouble.”

And with roughly 10.6% of national health expenditures coming directly from consumers, people are starting to feel the strain of rising healthcare costs.

Jean Moore writes for Mercer Signal about the clout employers hold when it comes to employee healthcare purchasing,.

With A High Deductible, Even A Doctor Can Shortchange His Health - Kaiser Health News

This article by Paul Johnson for Benefit News takes a basic look at why self-funding is a good option for small- to.

Agency License: CA #0I11857, TPA // For a complete list of states and license numbers, please visit www.nonstopwellness.com/licenses
© Copyright 2020 by Nonstop Administration and Insurance Services, Inc. All Rights Reserved. Terms Of Use Privacy Statement